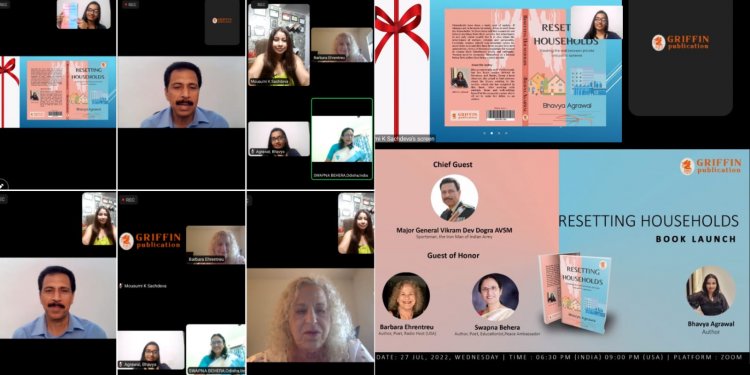 Bhavya Agrawal is an IT Professional, but her heart always thrived in literature and books. Being a keen observer, she ached to find answers about the biases existing in society, which she has compiled in this book. After working with multiple firms and well-settling herself in a corporate career, she has come up with her debut book ‘Resetting Households’.

Chief Guest Maj Gen Vikram Dogra congratulated the author for her book and critically analyzed the content of the book thus making the show highly interactive. He further stated, “women can do everything a man can and more than that…” He further justified his views with statistics and data and suggested that women must utilize the skills they are good at and thus empower themselves.

Ms Swapna Behra examined the book in detail and further viewed her perception of women empowerment and put forth the examples of all successful women of India including India’s present President Draupadi Murmu.

Ms Barbara stated the subject of the book to be very important and spoke about women’s liberation in America. She said that women must be given the opportunity to try every field and there should be no differences in the jobs for men and women.

The entire talk show was full of debate and discussion thus highlighting the picture of our society with a special mention about the equality between men and women.

CEO Griffin Publication Mousumi K Sachdeva ended the show with her vote of thanks.

The link to grab the book is as below-

NEHA NAGAR -24 Years Old Girl Once Gave Up on Dreams Now the Queen of...

Who can raise money through Infrastructure Investment Trusts? | Govt Scheme...