Sandy Khanda is the CEO and Founder of Green Pencil foundation. He was born in a small Haryana village and moved to Delhi with his family for his higher study. In 2019, he started his own NGO named GreenPencil Foundation that works around the country. Punjabi is a Punjabi language and culture In 2021 he will receive a Certificate of Appreciation for his outstanding work in the field of Punjabh an Indian language trade union He has also been awarded a certificate of appreciation by the Intellectual Punjabis Chamber Of Commerce 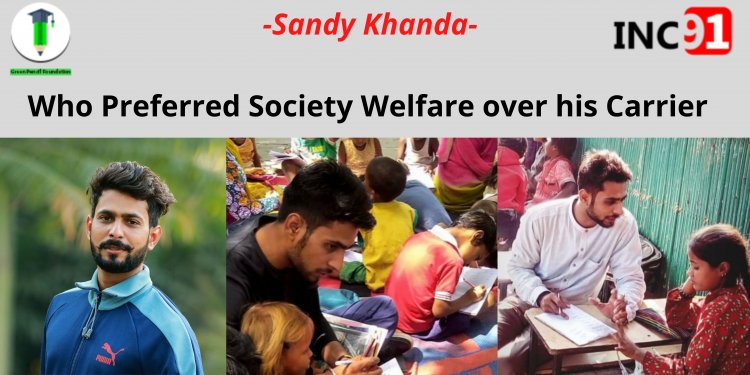 Sandy Khanda a middle-class farmer’s boy is now CEO and Founder of Green Pencil foundation, his small initiative to inspire youth-led all over the country by his motive to serve the country. He was born in Khanda a small village of Jind district in Haryana.  He has completed his schooling from his village and city named Karnal his interest lies in Social work from his childhood and pursued his passion he comes from a middle-class family and later on he moved to Delhi with his family for his higher study.

The journey from village to city

During his journey from a small town to a Metropolitan city, he faced all those problems which exist in society from roots. He always analyzes the gap between Man and Women, how Indian society neglecting equality.  After his move during his college days, he started writing articles and poems on social issues which were experienced in the journey.  He experienced the worst Climate Conditions, air pollution, kid's challenges living in slum areas in Delhi NCR. These things turned his mind to become a full-time Social Activist. This is how an engineering student started educating slum children on a weekend basis, started organizing Climate protests,  started organizing plantation drives after completing his Engineering he got offers from top MNC'S but he chose Social Work by quitting his job. He got his write-up published in newspapers like Amar Ujala on the real Situation of farmers in India based on real-life experiences. He is popular as a writer in Hindi and Urdu. During his journey, he worked with many NGO'S and in 2019 he started his own NGO named Green Pencil Foundation that is totally youth-led NGO Working around the country and outside the country in Indonesia and Iran as well.  In 2020 he was invited by the NITI Ayoog to discuss the ideas to beat Covid19.

In 2019, He Received the Environment Noble award from the Bulland Welfare Society and Municipal Corporation Gurugram for his great work towards Environment.

In 2020, he received pro planet organization for his outstanding work on climate change; he received Award by Green Mentors in Bal Bhavan New Delhi also received an Appreciation Certificate from the World Book of Records London for his work to help covid Affected families and Animals Welfare during covid first wave.

In 2021 he has received a Certificate of Appreciation from the Intellectual Punjabi Chamber Of Commerce for his outstanding work to help people during the Covid19 second wave.

He says “His family loves his work and feels pleased with his accomplishments.”

A person from a small village, Motivation for others

Sandy Khanda is the first person in the Country who preferred Society Welfare over his Carrier. He dedicated himself full time to serve Society.

Now in the Area of Social work and Writing Sandy Khanda is a big name in India, as he achieved many achievements at a small age. He inspiring the youth all around the country with his Social work and becoming a personality to motivate others.

If it does not even out-export Bangladesh, India will not be the next...