Women have a higher success rate in the business, but they take less risk. Women-owned and led businesses are a better bet for investors. Famous people also believe that the way we view entrepreneurs needs to improve. They say we shouldn't think of CEOs as men or women, but rather as individuals. 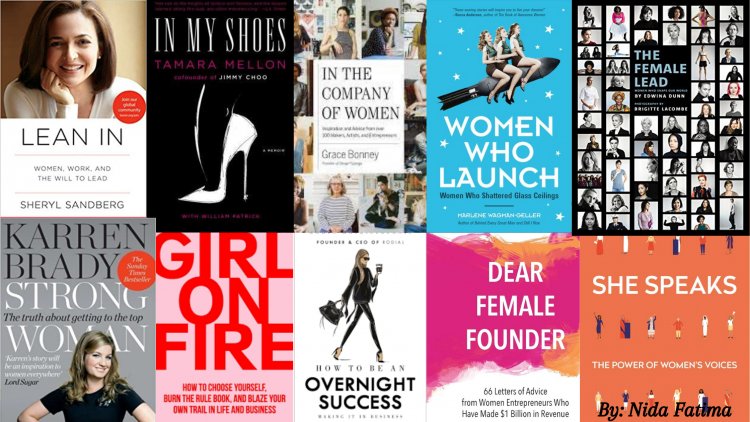 In the last century, women have made an immense effort to be present on the map of success when it comes to entrepreneurship. They have a big influence, but they can do a lot more. Women have a higher success rate in the business, but they take less risk.

Women-owned and led businesses are a better bet for investors, but a lack of venture capitalists indicates that they still struggle to raise the funds they need, according to statistics on female entrepreneurs.

Famous people also believe that the way we view entrepreneurs needs to improve. They say we shouldn't think of CEOs as men or women, but rather as individuals who are good or bad at what they do.

When the world understands this concept, the world of entrepreneurship will become a better place for both men and women.

That's why I enjoy reading motivational business books written by women who have created successful companies and aren't afraid to admit their mistakes. You will learn a lot from other people's experiences and even be inspired by their accomplishments.

To help and motivate females I am sharing some inspiring books for the female entrepreneurs that every female need to read and these books are sure to relight that fire.

Dear Female Founder is a series of 66 letters from women entrepreneurs who have produced $1 billion in revenue, detailing their entire entrepreneurial journey, including emotional highs and lows, but most importantly, a true and inspiring tale.

The dear female founder is a one-of-a-kind collection of words of motivation, wisdom, and practical advice from successful female entrepreneurs. If you're a young female entrepreneur or an intrapreneur working for a larger corporation, the insightful advice will help you succeed and inspire you. If you're thinking about starting a business or want to inspire the next generation, I strongly suggest you read this book.

HOW TO BE AN OVERNIGHT SUCCESS – MARIA HATZISTEFANIS

Rodial's cult snake serum was quickly labeled an "overnight success" by the press when it was first released. Rodial's creator Maria Hatzistefanis, on the other hand, had been toiling away in her bedroom for 18 years, creating the business from scratch. Now, in this very open novel, the beauty boss sets out to show how its success was built on sheer hard work, tireless efforts, and a lot of patience.

Fashionistas Maria set out with the goal of starting a beauty company, despite failing to succeed in school and being fired from her first job. She achieved her goals by dreaming big, working hard, surrounding herself with the brightest, taking chances, generating buzz, and building a following.

She accomplished this by dreaming big, working hard, surrounding herself with the brightest, taking chances, generating hype, and developing her own personal brand, which is now favored by high-profile models and media personalities such as Poppy Delevingne, Daisy Lowe, and Kylie Jenner. Maria shares some of her most valuable lessons in this book and emphasizes the importance of patience.

Girl on Fire, by the best-selling author of Girl Code, teaches you how to start living the life you want without asking anyone else's permission. You'll be motivated to overcome any obstacles in your industry if you support women who create their own opportunities.

This is one of mine favorite quote from the book “Successful entrepreneurs don't wait for their "big break" —they create it. They don't wait to be featured in a magazine, or picked up by a publisher, or given a chance to speak on a stage. They promote themselves on platforms they create, they self-publish their own books, they launch their own podcasts, they create their own events, and build their own stages.”

IN THE COMPANY OF WOMEN – GRACE BONNEY

Women are adopting the entrepreneurial spirit and launching innovative companies all over the world. Over 100 of these powerful and talented women from all ages, races, cultures, and professions are profiled in In the Company of Women. These interviews detail the keys to success (for example, going with your gut; maintaining meaningful and long-term relationships), highlight the importance of daily rituals (meditating; creating a daily to-do list), and provide advice for the next generation of female entrepreneurs and makers (stay true to what you believe in; have patience).

Women Who Launch is a history of women in business and one of the most inspirational books for female entrepreneurs. You'll be inspired by the true stories of women who have experienced enduring success, such as Estee Lauder and Julia Ward-Howe, who are profiled in this book.

STRONG WOMAN: THE TRUTH ABOUT GETTING TO THE TOP – KARREN BRADY

Karren Brady, one of my biggest inspirations, has overcome the odds. Karren went on to become Vice-Chairwoman of West Ham United after doctors told her she had a brain aneurysm following a regular examination and that she needed an operation with a 30% risk of not surviving. This is a great one for all you mumpreneurs who are juggling a family and a company.

SHE SPEAKS: THE POWER OF WOMEN’S VOICES – YVETTE COOPER

This is the book to read if you're looking for ideas for public speaking. You can't help but feel inspired when you see incredible speeches given by women throughout history. She Speaks features speeches by everyone from Boudica to Greta Thunberg, so there's bound to be one that speaks to you.

THE FEMALE LEAD: WOMEN WHO SHAPE OUR WORLD – EDWINA DUNN AND BRIGITTE LACOMBE

The Female Lead is the story of 60 inspiring women from all walks of life who will inspire you to take control of your business. You'll be able to see what women who are unapologetically ambitious can do by looking at profiles of everyone from firefighters to movie stars.

IN MY SHOES – TAMARA MELLON

Tamara Mellon, the co-founder of the famous Jimmy Choo, discusses how she became one of Britain's most influential self-made businesswomen. Fashionistas and entrepreneurs will love this book. In My Shoes is a candid look at the highs and lows of establishing a profitable brand.

LEAN IN: WOMEN, WORK AND THE WILL TO LEAD – SHERYL SANDBERG

Sheryl Sandberg, the Facebook COO and one of Fortune magazine's Most Powerful Women in Business, understands what it takes to be a woman with ambition. You'll learn what little improvements you can make to hit the top, based on her own experience working in some of the most profitable companies.

PM calls for cross-utilization of research and institutionalization of...

The ‘10 Ways that can help in Evaluating a Market’?