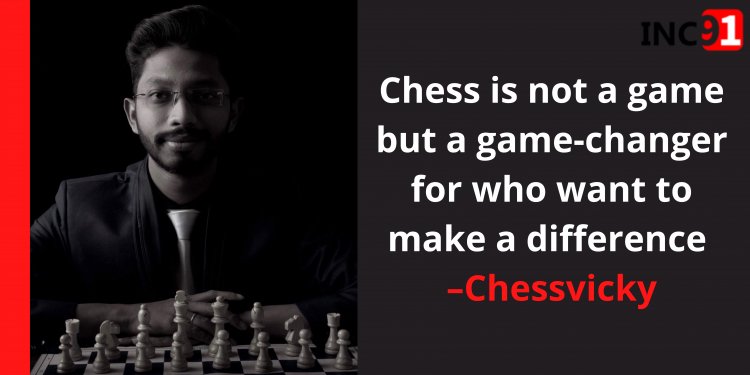 “The beauty of chess is it can be whatever you want it to be,” stated Simon Williams, an English chess grandmaster, and writer. It cuts over all barriers, including language, age, color, religion, politics, gender, and socioeconomic status. Regardless of their circumstances, everybody may enjoy a nice chess battle to the death.”

With the aim of spreading sport throughout India, Vinayak Jagannath Wadile started Chessvicky, a platform to provide different opportunities to chess players. It’s not the stars that make your destiny it’s you who makes it.

Who is the youngest entrepreneur and youngest chess player

A Young International Fide Rated Chess Player Vinayak Jagannath Wadile decided to start Chessvicky Pvt Ltd as its core founder and CEO. This acclaimed firm is based in Nashik which is running since 19 August 2016. He created the first chess website all over Asia with the help of his friend Abhishek Wani. Thereafter he launched an online chess learning app, 'Chessvicky'. His childhood friend Akshay Jadhav helped him in making the android app, for which he has received an overwhelming response. He has been well-known and awarded the Nashik Mirchi Youth Icon, National Young Birla Indian Award in 2019, and state-level Kridaratna award quite recently.

With more than 1 million chess players in all 28 states in India, 25 lakh players are from 36 districts of Maharashtra and about 15 thousand just from Nashik city. Where Football is played in 198+ countries and chess in 195+ countries, it is the second most popular game after Football. This data makes approximately 6 billion chess players around the world from a 7.7 billion population. To bring together all these like-minded people on one platform, Vinayak decided to make “Chessvicky” where they can play chess easily. While many industries have shut down in the current recessionary environment, this new app of this young man from Nashik is making it clear that the young people of Nashik are not lacking anywhere in the world.

The top competitors of ‘Chessvicky’ include Chess.com, lichess.com, chess24.com, and Chessbase. Their competitors offer services like online gaming, puzzles, and articles. The feature that distinguishes them from others is the 'classroom'. In this unique system, you can ask your any doubts to grandmasters, international masters, and renowned chess players. They will reply to the players and help them with no charges. Webinars with minimum cost are held in regional languages like Marathi, Hindi, and English. These webinars are by prominent grandmasters and international masters who guide chess players in India. Due to accessibility in many languages, learning chess is also easier for the villagers. All these features make ‘Chessvicky’ unique and stand above the competition.

“I knew I wouldn't regret failing,” Vinayak adds, “but I knew the one thing I may regret is not trying.”

This was the prime mantra of Vinayak Wadile which won him many glories with the support of his friends and family. He noticed that even though there is a large number of chess players but every one of them can't afford the fees for coaching in chess. To make learning accessible to one and all, Vinayak decided to train chess players to future masters, not just from cities but from towns too. The honorable mentors involved are Grandmasters, International masters like GM Adam Tukhaev, GM Vidit Gujrathi, GM Shardul Gagare, WIM Bhagyashree Thipsay, and many more. The people teaching in webinars have very few charges or mostly are free of cost that is helpful for villagers.

They also offer many other things such as 1000’s puzzles, quizzes for the development of the game. The Company has organized Many Offline International, National, State Tournaments and Coaching camps to spread awareness and for the development of chess. In 2016, the company was awarded as Startup of the year and received the Best Startup Award in 2017. In 2020, Chessvicky Entered in Best 500 Startups in India and was also recognized by STARTUP INDIA.

Chess is my life, passion, inspiration. It is my spiritual strength it helps me to meditate and also  gives me joy and happiness- Vinayak state 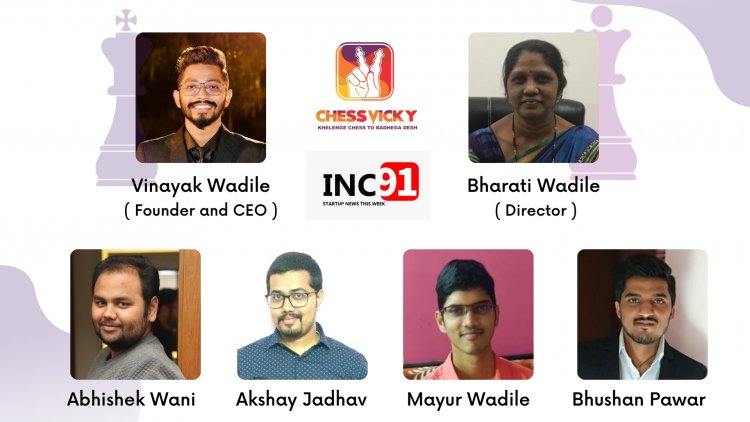 The team is set to start many interactive puzzle tournaments and quizzes with minimum entry fees with many prizes. Also, the company is planning to work with Argument reality and Virtual reality. Because of this, players all over the world can play live virtual chess and see live pieces in the room.  Those pieces could also be seen moving. They also provide scholarships for the players who have good skills and want to build their career in chess but aren’t able to do so due to financial issues. Their main goal is to consider chess as a subject in all schools of India from the nursery. There are very few grandmasters from India but many from other foreign countries. This is because the foreign countries start sports training of children from an early age in their country. If we work on this our country will soon get many masters in chess. With himself as the Founder & CEO and Mrs.Bharati Jagannath Wadile as Director of his company, they cross new milestones every day. Vinayak is also the Managing Director at Sportify International Pre School and Organizes My Event Company.

Zerodha has a booming platform for content, but it does not plan to milk...

UltraTech Cement increased by 7% in Q11 on good operational results